Get My FREE Copy
The Five Must-Knows for Treating SIBO
that have helped every person I've worked with. 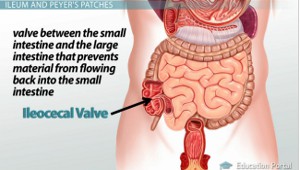 The fine-tuned controls of the ileocecal valve can be lost through a number of mechanisms. One way is through inhibition of the nerve supply to the muscles. The ileum and the ileocecal valve are densely packed with a network of cells called the interstitial cells of cajal. In past blog posts, I’ve discussed the interstitial cells of cajal, but let me give you a quick primer. These are a network of cells, really the pacemaker of the gut, that sets up a signaling network that coordinates the wave like contractions in peristalsis. They help coordinate the timing – setting the pace for these contractions to occur.

Signaling can become impaired through an antibody/ autoimmune reaction through something as simple as a food poisoning event and here’s how:

E.coli, Salmonella, Shigella or Campylobacter all produce a common toxin called Cdt-B toxin (Cytolethal Distending Toxin B). Once exposed to this toxin, through a food poisoning event, some people (not all) will produce antibodies to this toxin. These antibodies may also attack vinculin creating an autoimmune condition.

Vincluin is a protein that connects the network of cells within the pacemaker of the gut; within the Interstitial Cells of Cajal.

If vinculin is damaged or destroyed, it can’t link the cells within the pacemaker and you then can’t transmit the electrical signal to contract your smooth muscle. This stalls gastric motility during meals and in between meals.

If you have acquired SIBO through a food poisoning event, this may be a concern for you. I recommend that you have the IBS –Check test done to look for antibodies to the Cdt-B toxin and to vinculin.

I was able to put this evaluation to the test after I had a very light food poisoning event three weeks ago. I remember laying there thinking, “my ileocecal valve is stuck open; I can feel it!” I knew what to look for from these questions and every one of them was completely on point for me.

Whenever the ileocecal valve was stuck open, I had referred pain in my right shoulder, my lower right back hurt and it almost felt like I was having heart burn – but it was actually an intense pressure like feeling, up under the middle of my ribs. I was down with this for a day – working through some exercises trying to get it to close. It was really painful to the touch and after I would manipulate it – I’d feel this low grade release feeling and everything would calm down for about an hour, then it would happen again.

It was a really crazy to have this experience myself and to then know what my patients are going through on a daily basis!

To try to manipulate this back into place, get down on all fours, and arch your back in the cat position of yoga. Brace yourself with one hand and then use your dominant hand like an ice cream scoop in repetitive movements from your lower/ outer right hip into your belly button.

It is often extremely tender when you first start this exercise and it will sometimes exacerbate for a moment, but then it will relax and your symptoms should subside. Another way to Self-release of ileocecal valve:

Laying on your back with knees bent: you can locate the valve 2 fingers below the belly button halfway towards your R hip bone. Basically if you find a tender spot, or a harder feeling tissue, you’re on it! Maintain only enough pressure for you to feel the spot, and rotate knees to R and L to increase mobility of the area. Pressure should be held for 30-60 seconds, 2-3 times 3-4 times a week. 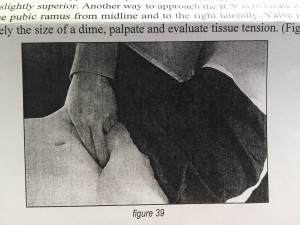 I always recommend having your ileocecal valve further assessed by an ND, chiropractor (or other manual therapy practitioner).

Hi Niki, Yes, this can definitely be a cause of IC valve pain. If there is a motility issue, and especially with chronic constipation, the back up of stool can press on the IC valve, which will cause pain. Warmly, Angela

Hi,
Can IC valve pain/gas be due to large intestine dysbiosis? If the sibo retest os now clear. Thank you!

Hi Karen, That should be easy enough to determine. Seek out a Visceral Manipulation therapist and have then assess it, as well as your doctor and screening this properly. Also, if the valve is dysfunctioning, there is often pain and discomfort with this (but this isn't diagnostic).

Hello,
I have been suspecting an ileocecal valve malfunction in relation to my digestive issues and appreciate this info...
Do you think a faulty valve could be misdiagnosed as an inguinal hernia? I have had differing diagnoses--there is a lump that comes and goes in that exact place. I do not want to have surgery unless absolutely necessary. Thanks so much for your insight!
namaste
karen

I've finally found what I need!

OH MY GOSH! Something that makes sense, after reading this I feel closer to figuring out what is wrong with my gut. I went to Mexico in 2017 and got sick, I had horrible diarrhea the entire week i was there. After coming back I noticed my gut was still not well and it only got worse. I did so many tests, was diagnosed with Hashimoto's that year, but was still not well. It wasn't until this year that i tested for SIBO and it came back positive for hydrogen gases. I just finished my second round of herbal antibiotics and am still experiencing these horrible SIBO symptoms to everything I eat (I am on a SIBO specific diet.)

Thank you for the update! I find that 1/2 - 2/3 cup jasmine rice works well at one sitting. To increase weight, focus on adding in a well tolerated fat, like coconut oil.

Many thanks for the reply Angela and apologies for only getting around to seeing this today.

I've been experimenting further since my last post and can now conclude that the ACV wasn't actually the cause of spasms etc at all, and that it was actually the copious amounts of jasmine rice I was consuming at the time, in an attempt to gain back some lost bodyweight.

As appears to be very common among people with autoimmune issues, I don't seem to tolerate any grains very well at all.

Hi William,
That is interesting! I can't think of the mechanism here. I will say that inside the hip/ lower back area on the right is your IC valve. I am wondering if this is a bloat response that you are feeling, that this valve is being stuck open. I see that you are posting on the article that I wrote on this. I wouldn't expect a bloat response from Apple cider vinegar at small amounts - but this is at a load at one point in the day. So, I would try 1.5 tsp with each meal (or switch to Tummy Tamer bitters, HCL betaine, Enzymix Pro or Digestive Enzymes Ultra instead).

I wonder if this would explain why last month, when attempting a regimine of 4x tablespoonfuls of apple cider vinegar per day, in the hope of treating my Ankylosing Spondylitis, that around 3 days in I felt a sensation in my hip/lower back area on the right side go into spasm/cease up?

Also, I've also said that eating gluten brings on sciatica in my right hand side which, lasts for around 5 days.

« Is IBS an Antibiotic Responsive Disease?
If Lactose Intolerant, Can You Do a Lactulose SIBO Breath Test? »